The Art of Motivation

About 50 of my co-workers will experience their first triathlon as part of a relay at Escape to Miami triathlon. Over the past few weeks, I have been trying to motivate them to train. I have offered my own time to share my experience, guide them through swim survival, how to hammer the bridge on the bike and how to push through the hot and humid run. However, for some reason, I have not been able to fully motivate this group. Most do not know me personally. They do not know that all I want to do is inspire them to be active and enjoy a nice day out doing their body well. I supposed that some might be intimated. Some might not want to get up so early. Some might suppose that it is a piece of cake and might simply not understand what a triathlon entails. Whatever the reason (or excuse), I will continue to encourage them, one at a time, because even the slight change in one’s lifestyle is worth it.


EACH NEW DAY IS
ANOTHER CHANCE TO
CHANGE YOUR LIFE
This weekend turn out:
Terry and Michelle competed in a relay last year and are now going to compete in a full sprint triathlon. This weekend they decided to drive 45 minutes south to take advantage of the group workout. It was day and night to see him swim a nonstop 800 meter swim. Last year, he could barely swim 150 meters without having to turn on his back to rest. The best part is that he was able inspire his wife to join him to train and complete a full triathlon. I am very proud of them for making their goal into a habit! 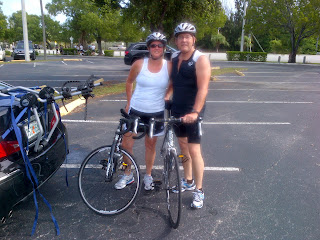 Jimmy has been showing up to almost every workout for the past four weeks. He thought he would only compete in the swim portion of the triathlon. Unfortunately, his cyclist has a knee injury. Consequently, he might need to do the bike portion as well.  I think it is a surprise in disguise. Last week he stated that he hates running but yesterday he decided to arrive prior to the group workout meeting time and run with me and my group. I have no doubt that this is the beginning of a new journey for him and that he will one day complete a full triathlon.
Inspiring Michelle, Terry and Jimmy makes it a successful group training session in my book!

Out of 50, only a handful of them are coming to the group workouts I am organizing.  If only I could motivate a few more to come… There is still time. I have hope! 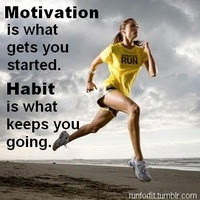