In preparation for the World Championship, the plan was to race Trilogy #2 just to put the hard work to the test and see exactly where I stood. Unfortunately, about 2 weeks prior to the race, I started having hip pain following an easy 4 mile run. I did some research online to determine what could be the cause as well as talked to some of my med friends. My IT bands might be to blame most likely caused by the continuous strain of hard  training every morning and rushing to get to work on time while ignoring the importance of stretching and taking care of my body. I knew I needed to take better care of my body. I immediately reduced the amount of running I was doing and focused on cycling and swimming. However, it did not last long. My type A personality and competitive spirit took over my desire to listen to my body. The pre-race brouhaha and the thought of being forbidden to compete caused me to become extremely eager to race. In addition, my coach lent me his racing wheels. In my mind it is “a little’s dream” to use racing wheels. They are used by fast athletes. You must deserve to use such expensive equipment. I found myself puzzled: should I or Shouldn’t I race?  My friends and teammates shared their opinion:  “Juju, concentrate on the goal”, “start and if it hurts stop” to “just do it, you will regret if you don’t”. And so I decided to listen to that last one. I knew I should not be racing while hurting but registered two days prior to the race anyways.
Unfortunately, I found myself not able to run the day prior to the race. My hip was aching. After picking up my race packet, I spent the remaining of the day stretching, taking Elson salt baths, and stretching some more. At that point I regretted spending $100 on a race that had no meaning.
On morning race, everything went smoothly. I felt rested after a full night sleep and woke up no more than 2  ½ hours prior to race start. Some might think it is extremely risky. However, I arrived with enough time to get ready and not too much to get nervous.
Oriana and I have been training and pushing each other extremely hard over the past few months (probably another cause of my hip pain). Unfortunately, the swim is what keeps us apart from finishing at the same time. I have been pushing her to swim hard. Seeing her behind me at the swim start, I advised her to keep swimming on my feet so she could use some of my streamline and draft to her advantage. Immediately after the swim start, I felt someone touching my feet. I thought to myself “wow Ori is doing so good”. However, the persistent hit on my feet was quite annoying and did not seem to be like her. I became irritated and sprinted to break away from the pack. Little did I know that the girl “on my feet” was actually a competitor that will be representing Team Mexico in October at Worlds. I finished 2nd in the swim with no idea one girl was ahead of me. To this day, I have no idea who this girl is. Overall, my swim felt consistent but I know I can do better. 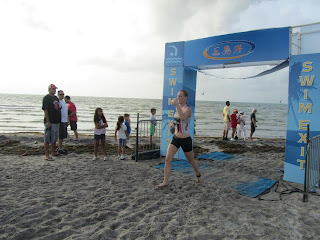 The transition to the bike was awful with t¼ mile run in the sand. Not the ideal condition for my hip.
I have been focusing on the bike lately and had high expectations. However, with regret, I did not even average 20 mph. The race was in fact rainy and windy which made the bridge difficult but I thought my training would have prepared me for such condition.  However, one factor I did not anticipate is the cross wind affecting my ability to handle the bike with the racing wheels. I did not feel as confident as I wished to. I then learned that racing wheels should probably not be used with a cross wind. As much as I could have regretted to spend the money  on this “little” race, it actually made me a more experienced cyclist. 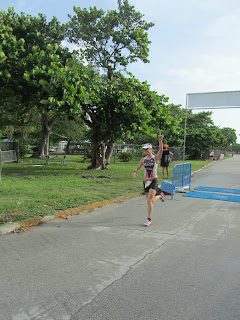 After the bike, I knew I was close to be in the lead position. I knew I had had a strong swim and did not let anyone pass me on the bike but rather passed many. All that was left was the run, which I knew was going to be difficult. The run was exceptionally hot and humid. My hip was aching but the adrenaline was helping. I tried to run with a consistent stride while concentrating on my posture. I encouraged a few teammates on the way, told a few walkers to run and walk after the race. To my surprise, no women were to be found around. By mile 2, my shoe lace became undone and so I thought to myself “here’s another lesson to learn from this race!”  I was glad to see the finish line although I was not able to sprint as I usually do. I gave it my all and it is what matters.
Key Biscayne Trilogy actually was not just a “little” race for me and I would have definitely regretted not doing it. Not only did I learn valuable lessons, I had the opportunity to meet ( and beat :} ) a member of Team Mexico that will compete with me at Worlds, I also finished 2nd female overall but most importantly, this race took place on July 22nd and marked exactly the 3 months from the World Championship: A reminder that a lot of hard work is left to be done. I must stay healthy and train hard and SMART and keep my eyes on the goal. At this point, anything is possible!